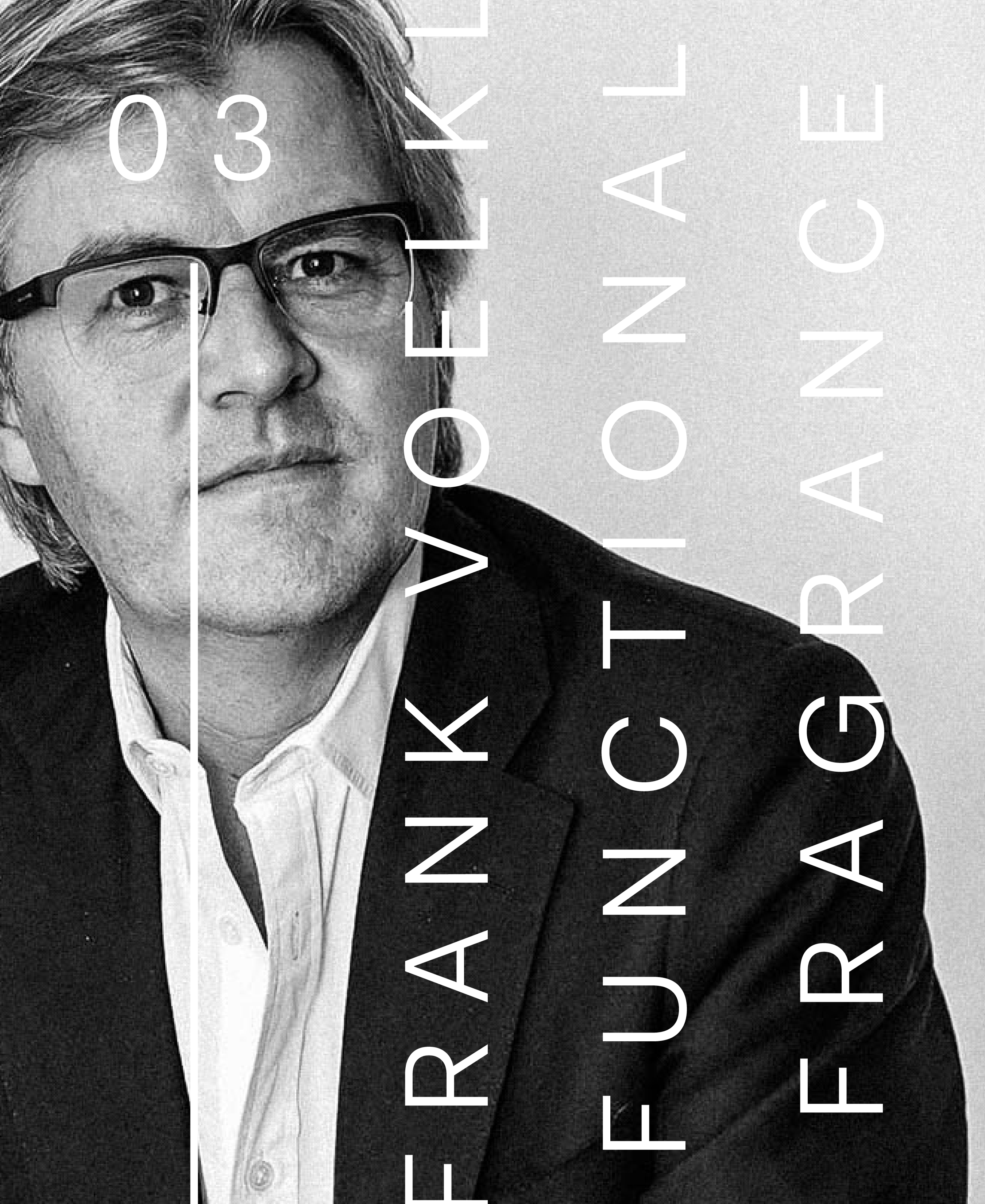 Frank Voelkl might not be a household name, but you're likely familiar with his fragrances. The perfumer is responsible for creating some of the most recognizable + unique scents of the past decade [read: Le Labo Santal 33], and more recently was tasked with formulating our stress-busting, Functional Fragrance. Here, he discusses everything from how the physical act of smelling affects the brain to good vs. bad ingredients. Read on for the full interview.

Career path: I developed my love of scents as a teenager when I moved with my family to Paris. Suddenly, seemingly out of nowhere, I became interested in smelling everything. On the weekends I would go to a store on Rue de Rivoli by myself and smell my way through all of its products. Then one of my parents friend’s suggested I attend the perfume school in Versailles, called ISIPICA Paris. From that point on, I knew that was what I wanted to do. I was maybe 17 at the time. Before that, I had wanted to become a diplomat.

Learning to smell: The first thing you learn at perfume school is raw materials. It’s like cooking, you need to know all the ingredients that you’re going to use before you mix them in a dish. Then you have to train your olfactory memory. At school I had to learn around 400 raw materials—meaning I had to know how to put them in a fragrance family and be able to recognize them blind. After that, it was a very long learning curve. They say it takes five years for a perfumer to know how to put things together, and then another five years to master your formula.

Smell, memory + the brain: There’s a clear connection between our sense of smell and the brain. When you physically smell a fragrance, the molecules go through your nose and hit sensors. Those sensors are connected with receptors in different parts of our brain, so depending on which receptors are being triggered by a scent, different emotions can be triggered too. Think, for example, of the scent of your mother or a person you hate. If you were to smell those scents right now, they would trigger good or bad memories.

Formulating for functionality: The intention with The Nue Co. was to take key ingredients and create something that felt organic, natural, and effective. Functional Fragrance is refreshing, has texture, and possesses some richness, but not in an overwhelming way. It’s the perfect balance between stimulation and calmness. As you use it throughout the day, it will grow subtly in depth.

Unisex fragrance: Overall, unisex fragrances include ingredients that are more commonly used in men’s fragrances than in women’s, [florals are typically considered more feminine, and woody more masculine]. The way I approach it, though, is to not think gender at all. With Functional Fragrance, I aimed to capture the sensation at the heart of it and create something beautiful, completely disregarding the “gender” of the ingredient I was using.

Favorite ingredient: Cardomome verte—a key ingredient in Functional Fragrance—is an ingredient that is very close to my heart. It’s spicy, fresh, and very crisp. I’ve always loved to use it, but last year I grew even more attached to it after a trip to Guatemala where I saw its extraction process from start to finish. Orris is another ingredient that I love to work with. It’s the root of iris flowers and you have to dry it out for seven years to develop its scent.

Application: For me, there is no rule other than to try not to spray it in your eyes or mouth. But if you’re looking for guidance, there are certain areas on our body that have higher blood circulation—like your neck and wrist—that will help it take affect. There are ways to dose how much fragrance you get, but there’s no real rule. Whatever suits you. Personally, I like to spray fragrance on my chest.

Developing your nose: The sense of smelling is one more closely associated with animals than humans. Dogs smell each other, we use pigs to find truffles. Because of this, I think the human species hasn’t looked to be educated about the sense of smelling—we want to differentiate ourselves from the animal act. The difference, then, between me and the average person is that I have been taught to talk about fragrance.

Good vs. bad: Fragrance is so subjective that you will never cover everybody and their taste. You can create a fragrance that will be totally addictive and loved by some and at the same time, completely misunderstood or hated by others. It’s much easier to create fragrances that you know everybody will like, but maybe no one will love. A floral bouquet, for example, would cover a pretty large crowd, but it wouldn’t be particularly interesting.

Loving the job: I love my job for many reasons, but if I had to boil it down to one, I would say my professional raison d’être is the freedom to create something that people can enjoy. Allowing people a moment of pleasure is special. I’m grateful for that, because I feel like I’m contributing something good.